We hear from 350.org Executive Director May Boeve on radical climate finance. Plus, get Spring’s analysis on how we can make money do more for all generations.

How can we join forces to shift money and power toward climate justice? For those of you familiar with Spring, you’ll know it’s a question at the heart of our FIRE program. It’s even more of a burning question now, given the landmark COP26 climate conference getting underway this month.

We hear from 350.org Executive Director May Boeve about how to shake up the relationships, resources and mindsets needed to power climate action.  Individually and collectively, we can make the transformational change needed.

👉🏽  What is climate finance … and how much is needed?

👉🏽  May Boeve on the biggest hurdle to overcome

👉🏽  How civil society and philanthropy (and you!) can catalyze climate finance innovation

What is climate finance … and how much is needed?

Simply put, “climate finance” is the money needed for a range of activities to limit the increase in Earth’s temperature to 1.5 degrees Celsius above pre-industrial levels. To this, we would add the money needed to support current and future generations to adapt and live in their communities in ways fulfilling their human rights and cultural traditions. According to the UN, the total price tag for keeping warming to 1.5 °C ranges from $1.6 trillion to $3.8 trillion.

Believe it or not, this is good news. The world has that money. Climate finance totals $632 billion right now. We know we’ve got a ways to go and we need to make sure it’s going to the right stuff, but we can do it. During covid-19, the world mobilized $10 trillion in economic stimulus in just two months. Two months. Not only that, if we start looking at the return on investment on decarbonization, costs become opportunities for resilience. According to the New Economy Climate Report, shifting to a green economy could generate $26 trillion more in direct economic gains in the next decade.

So, what’s the biggest hurdle to spending the money? 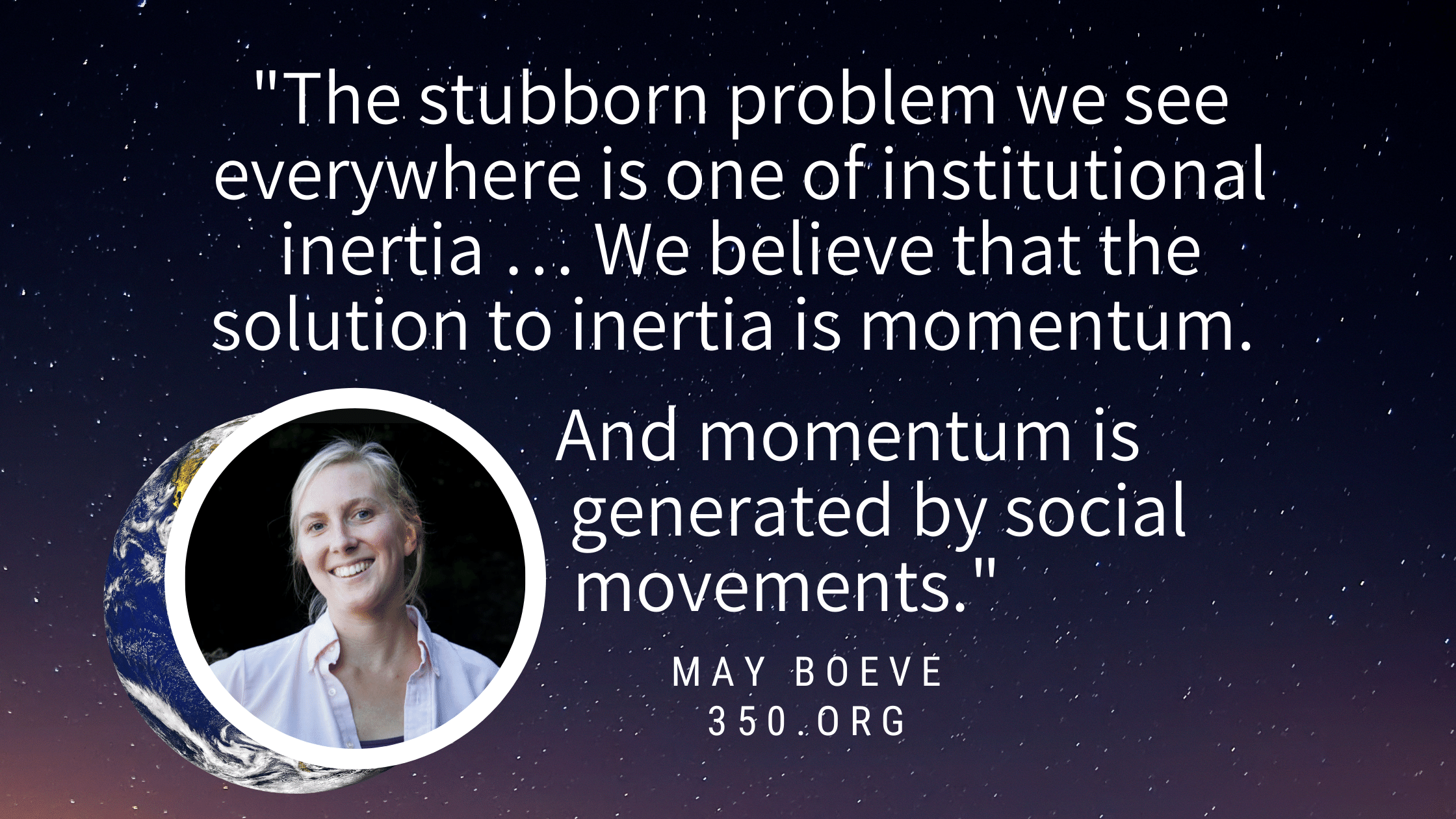 “We have won a critical fight in the climate battle, namely that most institutions now believe that for their own legacies, reputations, and even stock prices, they have to be able to say they're doing something about climate change,” says May Boeve, Executive Director of the global climate justice organization 350.org.

That “something” is where things get complicated, she warns. While big polluters leave it vague, communities call it stopping coal plants and oil developments. Unfortunately, nothing is stopping big polluters' licenses to pollute fast enough.

“Working side by side with climate activists all over the globe, the stubborn problem we see everywhere is one of institutional inertia,” she says. While most governments have signed on to the Paris climate agreement, their emissions pledges simply aren’t cutting it.

So, how can we jump this hurdle? “We believe that the solution to inertia is momentum. And momentum is generated by social movements,” May points out. These movements are at the heart of paradigm shifts that “changed the conversation about what is possible, and about what people can therefore demand from decision-makers.”

She gives the example of the now-cancelled Keystone XL pipeline from the Canadian tar sands to the United States. “The only reason you've ever heard of that pipeline is because of social movements putting our collective resources into that battle. The battle took years, and organizations of farmers and ranchers on the route; First Nations in Canada fighting the tar sands; Native Peoples in the U.S. living near the proposed route; and national and even global organisations who could mobilize their members at key moments and help direct elite attention to the battle.”

As civil society actors and funders, our work is crucial — on the frontline, in the background and in channelling the funds to power advocacy with exponential impact.

How can we catalyze climate finance resilience and innovation? 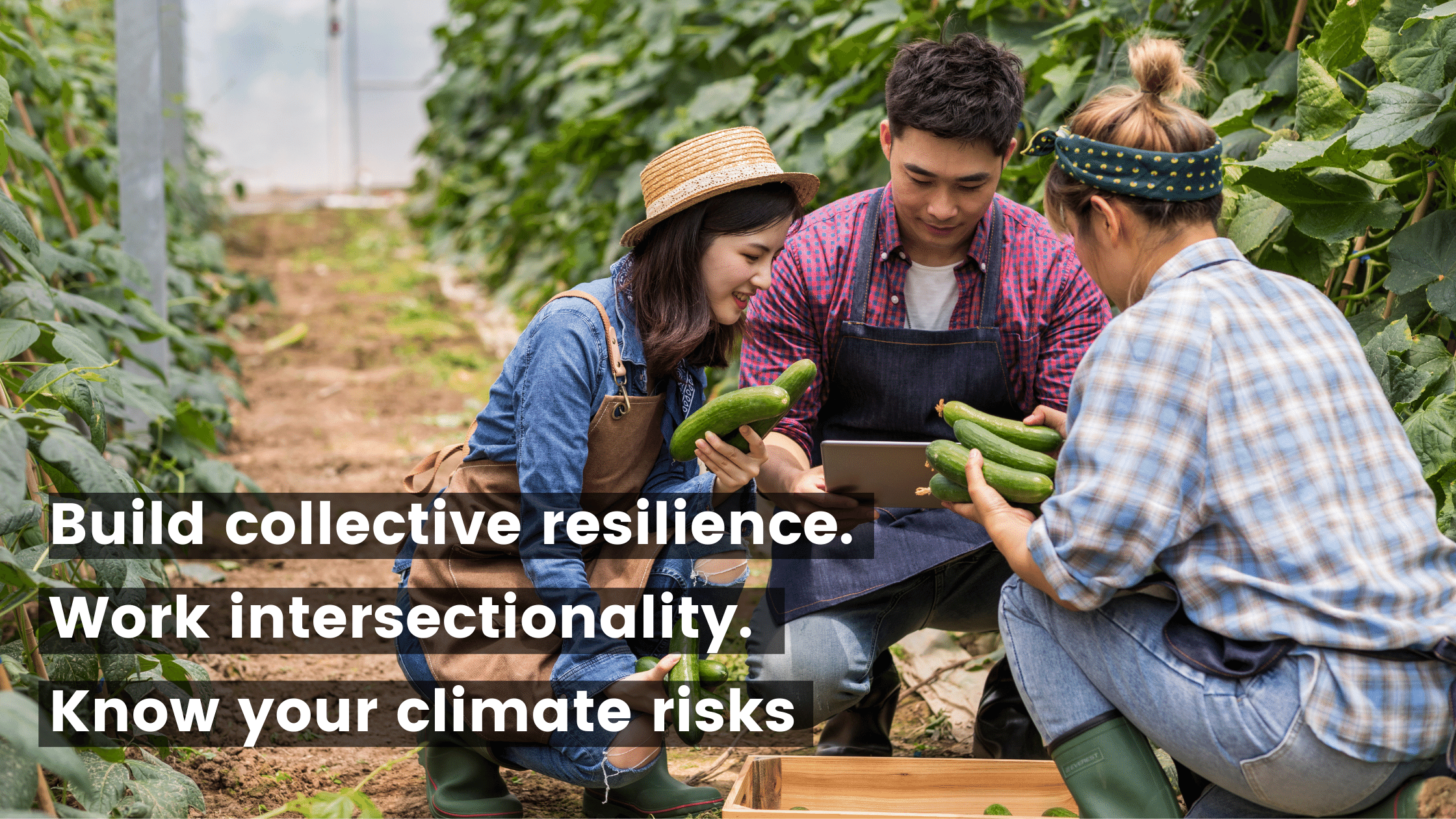 As May highlights, forging strong, long-lasting and multi-layered solidarity across the grassroots, colonial borders and class is imperative … and already yielding policy wins. For groups new to thinking about climate change in their work, here are just three key questions to consider, from your financial management to your program work.

As always, building the confidence needed to talk with donors about covering true costs, cultivating transformative partnerships and meeting the long-term needs of your field is a ball that’s ever in your court. 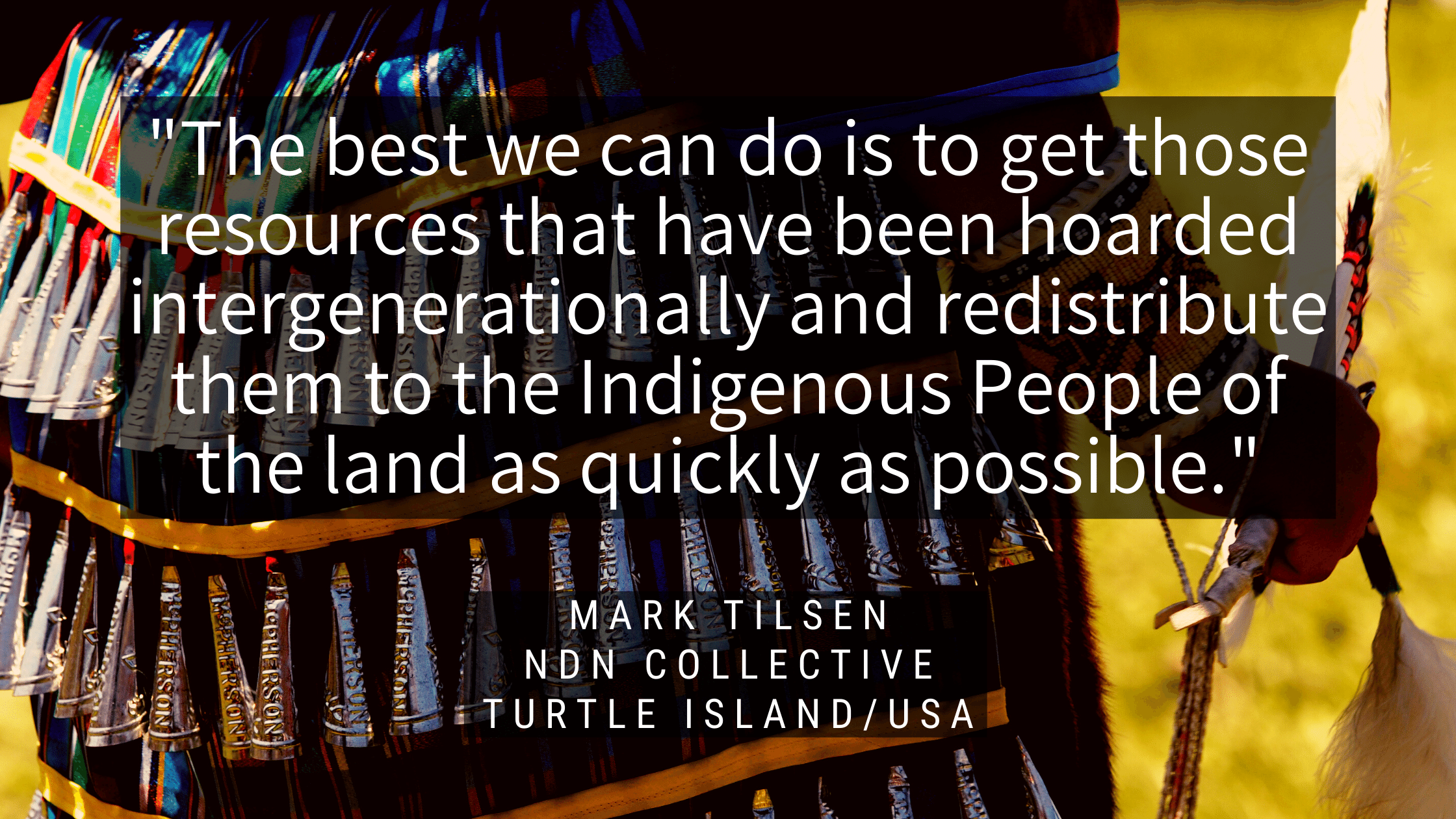 If social movement is the answer to climate inertia, then “funders who fund movements are driving at the radical heart of the problem,” May Boeve reminds us. “Whether it is providing core operating support to anchor organizations within movements [or] the convening of movement allies to build and deepen relationships and organisations.”  Funding should be channeled to the communities most impacted by climate change and in it for the long-haul fight needed to turn temporary victories into permanent ones, she says.

A slew of funders have announced climate funding in the runup to COP26. This is good news since, according to this month’s ClimateWorks report, global philanthropic spending on climate change is less than 2% of all giving. Philanthropists like Mackenzie Scott are starting to break with conventional wisdom by granting high-impact, trust-based funds to historically neglected frontline groups. Meanwhile, grassroots innovators like the Grassroots Climate Solutions Fund operate internationally, intersectionality and collaboratively to provide a range of support, from security grants awarded in 12 hours or less for activists whose lives are under threat to multi-year partnerships.

(1) Increase climate funding, especially to frontline groups. There’s an urgent need to increase the rate of disbursements of philanthropic funds. Some experts recommend a rate of 10% for foundations or donor-advised funds and 1-5% for wealthy individuals (MacKenzie Scott gave at 10% in 2020). It’s important this be directed to underfunded frontline, racialized and Indigenous groups. Funders can further make sure their grants are the right size for a variety of grassroots grantees and offer opportunities for institutional strengthening (such as through accompaniment programs or unrestricted funds). This can equip civil society groups for long-term fights and help shift power.

(2) Support Indigenous land rights:  Land is the root of wealth accumulation, particularly by former/current colonial governments. Indigenous leaders who successfully won the inclusion of Indigenous rights in the 2015 Paris Agreement manage half the world’s land but have legally recognized ownership over just 10%. Philanthropic donors can help disrupt colonial land grabs by supporting Indigenous Peoples’ land tenure rights. This can yield huge benefits in intergenerational justice while reducing deforestation (and therefore prevent billions of tons of carbon from escaping into the atmosphere every year).

(3) Engage in a way that supports young leaders. Youth have emerged as vital voices in the climate arena. As Maria Alejandra Escalante of FRIDA (The Young Feminist Fund) warns, funders should avoid tokenism. They should also shift their mindsets around youth. This means extending trust and seeing youth as experts and drivers of change, instead of beneficiaries. It also encompasses a willingness to influence the policy arena — being brave enough to take a political stand and speak up against government and market forces.

(4) Green and innovate in your investments. Philanthropists can pursue “upstream strategies” like divesting their endowments (as the Ford Foundation recently announced it will do). Alternatives include green stocks, bonds and equity. Funders can also pursue “downstream strategies” (impact investing) such as lending at concessionary rates for climate justice ventures and innovations in addition to grantmaking.

In its framework of extractive to regenerative philanthropy, Justice Funders describes regenerative philanthropy as “philanthropy that actively builds new economic systems that transfer the management and control of financial resources away from institutions and towards communities who have been impacted by wealth accumulation and the extractive economy.” This is what we should be aiming for as we pursue a life-sustaining world.

What is Spring doing?

“There is a responsibility among all sectors — government, corporate and civil society — to re-allocate funding toward climate justice,” says Spring CEO Ellen Sprenger, “especially when it comes to financing currently routed to fossil fuel companies and other activities incompatible with a liveable environment. Finding the momentum May talks about depends on multi-actor efforts and collaboration to bring about the systemic shifts to how money flows in our global economy."

As a leadership capacity accelerator, Spring aims to strengthen civil society across borders and supports climate justice organizations through our Financial Innovation and Resilience (FIRE) program, along with our High Impact Facilitation and Coaching programs. In cooperation with the Ford Foundation and Indigenous and Traditional Communities, we have attended dialogues, researched and published philanthropic best practices for healthy funding relationships with Indigenous communities. We’re also working proactively to engage with funders on how best to support civil society organizations in building greater financial resilience and strength.

Looking ahead to 2022, we have plans in the works to partner with Indigenous communities and funders to secure land tenure rights while adapting our programs to better support youth and decentralized movements and networks.

-With lots of gratitude to May for sharing her wisdom with us this month! 💚